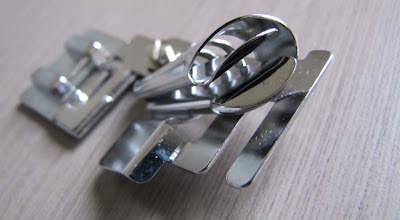 This binder foot attachment didn't actually come with my machine, my mother in-law gave it to me to try. I sew on 100's of metres of binding so I wouldn't use one of these attachments as the process has become habit for me, but for someone who learning to add binding, this may just be the thing. It does not add the binding in the tradional double stitch way, it is the single stitch method. All brands will have their own attachment so check with your manufacturer. This foot is for a Janome.

Post Edited 2/7/2010 - This post has been added to the Canadian Jamone team blog - Janome Life. It also gives you more great tips on using the binding foot.

Posted by Jodie @ The Haby Goddess

So when you say the 'single stitch' method instead of 'double stitch' you mean instead of sewing one side then folding it over and sewing the other, it feeds the binding through so you can sew both sides at once?

Yes Bree that's right - it feeds through & you only sew once

Oh I love the idea off this! I'm just starting to use bias binding and can't get it neat enough using the "double stitch" method and end up hand sewing the second side. This could revolutionise the way I sew!!

Thanks for the hint!

ooooo.... how do you think it would handle corners?

Emma, I think corners would need to be practised. I'm sure you could do it. Curves would be fine, squared a little more difficult.

LOL. I think perhaps we are overestimating my sewing abilities! ha!

wow- I'd given up on my binder foot, but when I saw this tutorial i gave it a shot- perfection! Thank you gery much, Haby Goddess!

That's fantastic! So glad to hear the tutorial worked for you.

Wow! Never knew such a thing existed! I always do "double stitch" because I don't want to sew twice, but sometimes when I'm not very careful, I miss on the backside! So thank you very much! Romi

thanks for the tutorial.. I've just bought the foot and waiting for it to arrive. Would love to see an extension of the tutorial to cover corners and joining the ends as everyone covers how to get started but noone covers the difficult stuff

Sami I agree that there isn't much on offer to explain corners with these attachments and I will admit that I round off everything as it will do curves. Ending & joining the bias would be done manually as normal. Make sure you leave long enough tails both sides to work with.

Newer Post Older Post Home
Subscribe to: Post Comments (Atom)
Welcome!
The Haby Goddess is an online shop, a blog, a sewing school and a community for all things haberdashery.
Items are sourced both locally and from around the world.
This is a space for me to share with you all the crafty news from the web.